Nowadays, as a barometer of economic development, the exhibition industry is brimming with vitality in China. It has witnessed the process and achievements made by China in its reform and opening up in the past 40 years.

On July 5, 2019, SIEC held a thematic event commemorating its 35th anniversary. At the meeting, Yang Jianrong, director of the Council for the Promotion of International Trade Shanghai, awarded medals to employees who had been working for SIEC for more than 20 years. He hoped that SIEC would stand on a new starting point of the new era, integrate national development strategies such as the “Belt and Road” Initiative, the integration of Yangtze River Delta, and the goal of building Shanghai into an outstanding global city into its own development, and embrace a bright future with great boldness, scientific business ideas, courageous innovation spirit, thus carrying on the ideals and responsibilities of SIEC staff generation after generation! Yang Jianrong, director of the Council for the Promotion of International Trade Shanghai, delivering a speech 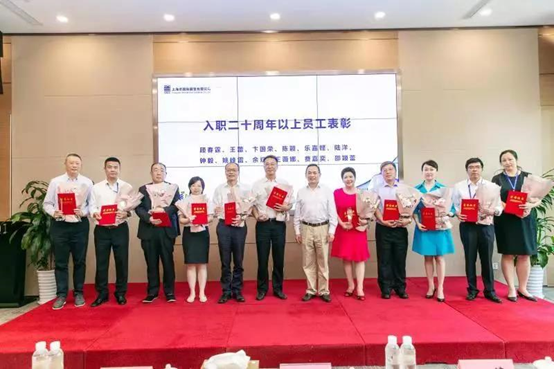 Awarding employees who had been working for SIEC for more than 20 years. 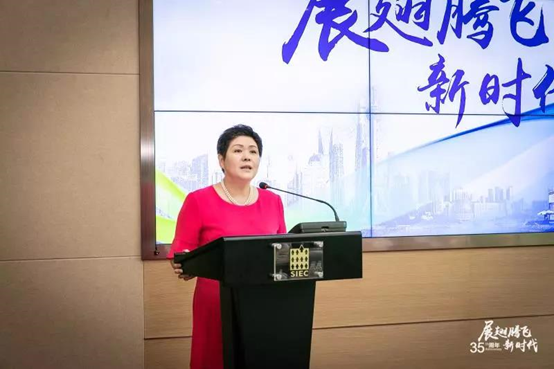 Pioneer in the convention and exhibition industry

SIEC and its subsidiaries have operated in the whole chain of convention and exhibition industry and held 600 exhibitions with an exhibition area of more than12 million square meters since the inception. After years of hard work, SIEC has gradually established four major brand exhibitions with “AUTO SHANGHAI, China Wedding Expo, DIE & MOULD CHINA, CHINA INTERDYE” at its core. These brand exhibitions have been the largest of their congeneric ones respectively in the world. As one of the world’s largest and most influential international A-class auto shows, “Shanghai International Automobile Industry Exhibition (Auto Shanghai 2019)” has opened a new era of technology-led auto show and become the barometer of the auto market and the wind vane of the industry. The Auto Shanghai 2019 covered an exhibition area of 360,000 square meters and received nearly 1 million visitors. It exhibited 1,500 vehicles and 128 debut vehicles. In 2018, the Auto Shanghai was included in the popularity list of the “Shanghai global new product launch” released by Shanghai Municipal People’s Government. SIEC will conscientiously implement the expectations and requirements put forward by Li Qiang, Secretary of CPC Shanghai Municipal Committee and Ying Yong, Mayor of Shanghai Municipal People’s Government, at the Auto Shanghai, strive to make Auto Shanghai a “benchmark” leading world-class brand exhibitions, and contribute to the high-quality development of Shanghai. The biannual “China Wedding Expo”, which has been honed by the market, has completed the full coverage of the wedding industry chain. With an exhibition area of 300,000 square meters, it has become the largest and most influential authoritative platform leading the industry development. “DIE & MOULD CHINA” and “China International Dye Industry, Pigments and Textile Chemicals Exhibition” have become world’s most authoritative professional exhibitions in the industries. Meanwhile, SIEC has held self-organized exhibitions including “China Auto Parts & Service Show”, “Photo & Image Shanghai” and “China Baby Photo Expo”, and co-organized a batch of highly authoritative and professional exhibitions and large international conferences including “CIMT”, “SFCHINA & CHINACOAT”, “CITME” “China International Boat Show”, etc.

Since 2018, SIEC has been cooperating with the Council for the Promotion of International Trade Shanghai (CCPIT Shanghai) to actively participate in the organization of the CIIE, including the preliminary planning, the exhibition solicitation for the auto exhibition area, the informationization construction of CIIE, and the organization work of Shanghai Trading Group. Meanwhile, under the leadership of CCPIT Shanghai, as a member of the Urban Security Leading Group , SIEC has participated in organizing the expert committee to have the review and other security work.

In response to the “Belt and Road” Initiative, SIEC established the “Belt & Road Brand Expo” in 2017. Till now, exhibitors from nearly 50 countries and regions have participated in the expo.

Rider of the waves of our days

In recent years, SIEC has been actively exploring the development strategy of “going out”. Since 2011, CHINA INTERDYE has started a exhibition tour in Asian countries and successfully held eight sessions.

In 2017, SIEC expanded its business to other cities and established Chongqing Huyu International Exhibition Co., Ltd.

Builder of the Chinese dream

Gu Chunting, Deputy Head of the Council for the Promotion of International Trade Shanghai and Chairman of SIEC said that standing at a new starting point and as one of the leading enterprises in Shanghai’s convention and exhibition industry, SIEC will continue to give full play to the advantages of trade promotion exhibitions and further lead the branding, internationalized, specialized, marketized and information-based development of the convention and exhibition industry. It will grasp opportunities amidst the challenges, remain true to the original aspiration, seek breakthroughs while adhering to its goal, and provide strong motivation and support for building Shanghai into an international capital of convention and exhibition. In the great process of realizing the Chinese dream, SIEC will strive to take bigger strides on the new journey and make greater achievements in the new era! 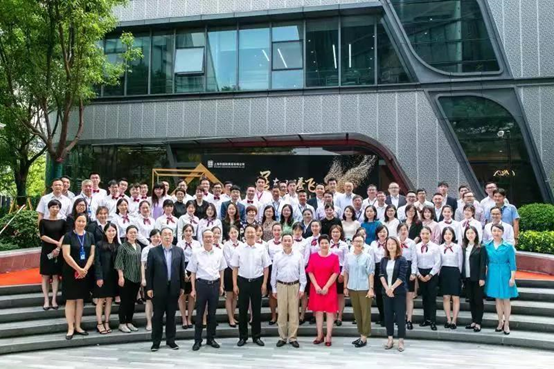